“Re-adaptive” Is The New Word in Real Estate Development 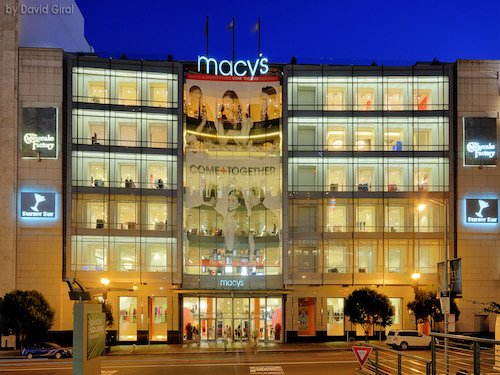 Last week, the new owners of the Macy’s building downtown announced plans to redevelop the side of the building on the corner of Stockton and Geary street.  If approved, the building would convert the upstairs portion of the building to residential units and office spaces.

Every year, I attend the ICSC Convention in Las Vegas. This is the largest convention of retailers in the country. Investors, developers, retail brokers, bankers all show up to talk about their latest development projects and deals in progress to bring retailers to their properties.  Over the last five years, developers at the show are now showing off they’re re-adapting of their former shopping centers and urban retail centers to meet the changing landscape of retail in this country.

Shopping centers are being converted from strictly retail to “lifestyle centers” which are mixed-used commercial development that combines the traditional retail functions of a shopping mall with leisure amenities oriented towards upscale consumers. Some shopping centers are being converted to schools and hospitals.  In urban retail centers, we are seeing the same strategy applied.

Cities throughout the country are teaming up with developers and working closely together to accelerate these projects.  As a result, many of these developments are either “under construction” or “close enough” to begin pre-leasing and signing new tenants.

This process does take time but with the assistance from local government it is happening in a big way.

The Macy’s owners have taken a big step in bringing re-adaptive use to a building that is one of the most iconic landmarks in Union Square. However, projects like the old Saks Fifth Avenue Men’s Store and the 6×6 project on mid-market street continue to be challenged by the bureaucratic and political landscape in the city.

San Francisco needs to take leadership now in working with landlords and developers who want to pursue re-adaptive uses in Union Square.  Today, we see shops located along the major arteries that lead from Market street to Union Square are dying.  Powell Street has seen major stores like Starbucks close, leaving almost entire blocks empty.  Stockton street retailers took a major hit when the street was closed for construction in the 4th street tunnel. Both blocks now have increased in homeless camps which has led to sanitary and often times safety issues.

Oracle recently announced they will be moving their annual meg-conference to Las Vegas, after being held in San Francisco for the last two decades. JP Morgan held their annual conference in San Francisco this month (brings in about $51 million to the city) and attendees took to social media to comment on our city’s homeless issue, lack of cleanliness, and even how unsafe they felt walking the streets downtown.

We need to gather owners, developers, and city officials to meet and create an actionable plan for re-adaptive uses of our upper floor retail spaces in Union Square.  Even by simply changing the zoning laws to allow residential and office conversation of these empty spaces will immediately create activity to eventually support new ground floor retailers. This will help take the pressure off of our limited residential and office market availabilities. Mayor Breed and San Francisco Board Supervisors– it’s time for ACTION.